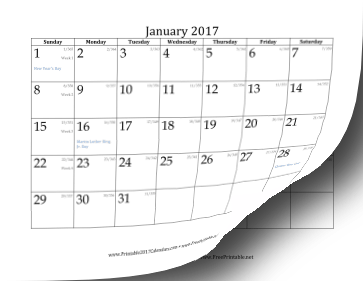 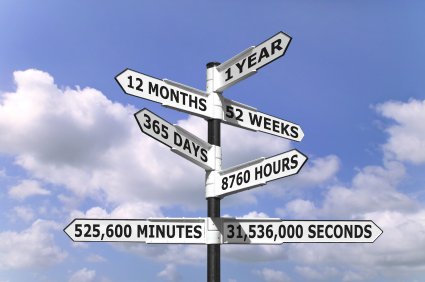 It has been a year, since I arrived in Spain, flying to Alicante on 31 January 2016.  I left a cold, misty Southampton behind, on a chilly Sunday morning, to start a new life, living in the sun.  Like most things in my life, nothing turned out, how I expected it to.  I had my preconceptions about what life would be like, living on the Costa Blanca; so far none of them have been realised, at least not yet.

We chose Gran Alacant, by sticking a pin in a map, not knowing the area at all.  It was a central  location, for all of us who came to Spain, to find jobs; opting to live in a largely British Expat community.  That was the right decision; for once we had not made a mistake.  The community here, is one of the best I have ever had the privilege to live in.  The people are welcoming, always on hand to offer advice and will always have a special place in my heart.  Gran Alacant is a wonderful place to live, enjoying stunning views, a sunny, warm, mediterranean climate and only ten minutes away from Alicante airport.

Settling into Expat and Spanish life was easier than I thought it would be.  To be honest, you don't have to speak the local language, although it does help.  As time has gone on, I have managed to pick up more and more words and am able to have basic conversations with the Spanish, in their mother tongue.  I can't deny, that most of the people we know, are British, but when dealing with every day life, banks, shops and public services, Spanish is a must.  It makes life, that much easier. 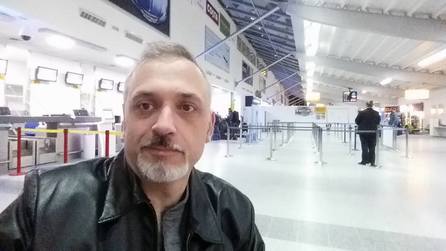 What a year it has been.  2016 has probably been my most difficult year yet; not one I will look back on with fondness! When we arrived in Spain we knew it would not be easy, but nothing could prepare us for the circumstances we found ourselves in, on a day to day basis.

Everything started well, within two weeks I had obtained a position with the local Horse Charity, in Gran Alacant.  I enjoyed working here and met many new people.  Shortly afterwards, I was offered a job at a family run restaurant and all the benefits that came with it.  Initially I enjoyed my time working for the family, who had owned the restaurant since 2002.  I stayed there until the July of 2016, nearly six months, when I left, due to a change in hours.

At the time Darrell received news that his Mother had cancer and would have to start going through chemotherapy.  We both decided that Darrell should return home to Australia, at the earliest opportunity, in order to care for his mother at this difficult time.  In August, Darrell left for Perth and a seven month stint, looking after his mum.  Darrell is returning home on February 28th 2017. 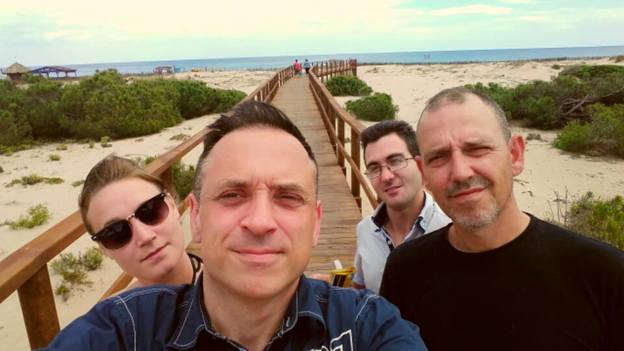 In May, Natalee arrived in Spain, staying with us, whilst looking for a job and  new future.  She had been going through a bad time at home, so we decided to give her the chance she was looking for. This was certainly my biggest mistake. Natalee came here as a holiday maker and continued down that path, at least for as long as she lived under my roof.  She was unable to pay her way, living with us, because her lifestyle took priority. Eventually she moved out, after breaking into my house, removing her personal belongings.

I will always remember what Natalee did for me in the past, she was a great friend, but used mine and Darrell's good nature, leaving us out of pocket, after what we had been through; it was unacceptable.  Too many people have taken advantage of us in the past, we will never allow that to happen again.  I wish her all the happiness in the world, but sometimes friendships have to end.  Eventually you do realise the error of your ways, I hope Natalee does as well. 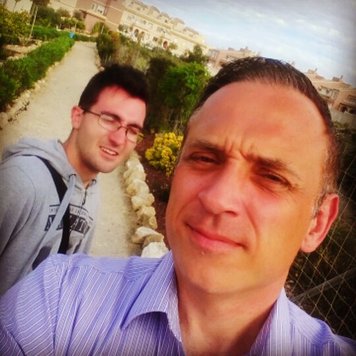 Jamie came to Spain with us, because he had to.  Life for him in Southampton had become intolerable, so we thought it would be best if he came with us, for a period of time and hopefully sorted out his life.  Jamie was given an opportunity to succeed and move forward with the hope of a decent future.

He did remarkably well at the beginning.  At one stage his was working two jobs and seemed to be happy at least.  Jamie was well liked at the bar he worked in, but as is the story of his life, he got involved with things he shouldn't have.

During the last three months he was living in Spain, he deteriorated rapidly. He was drinking every day, stayed out all night and slept all day.  He was looking pale and ill.  It wasn't great watching someone destroy themselves again. Self destructive behaviour is an illness, that only he could really sort out.

It wasn't until Jamie left in January of this year, that I was told of the full extent of his behaviour.  There comes a point when you have to let go of bad influences on your life.  Today, Jamie has gone and I have no intention of contacting him again.  He needs to find his own way in life and others will have to take up the burden of looking after him.  I did all I could at a difficult juncture in his life, when no one else would.  I am not sure if Jamie will ever find what he is looking for, but for his sake, I hope he does. 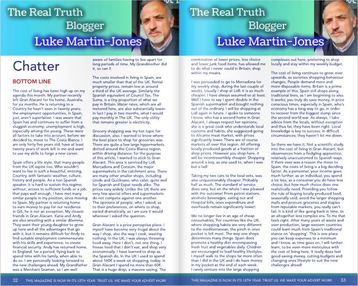 To be honest I have achieved everything I set out to achieve when I came here.  In May 2016. on my Birthday, I officially became a Spanish Resident; this was always my intention.  Britain was a bad memory and becoming 'official' , was a big step in forgetting the demons of the past.

As a writer, I was also given an opportunity to write a monthly column in a local magazine, the G A Advertiser. I have been doing this since July of 2016 and thoroughly enjoy writing about real life here in Gran Alacant.  The feedback I have received has been positive and The Advertiser, as a publication has had a fantastic year.  It is good to be a part of that success.

In September I was given the chance to teach Spanish children English, at a school in Elche.  I had always wanted to teach in one capacity or another, so this was a great introduction to doing what I love; helping and teaching others.  The children at the school are very different to those in The UK and are a joy to teach.  Despite new challenges in the future, I still hope to remain in post!

I started Blogging in April 2015, nearly two years ago.  Spanish Views is my third blog and my most successful to date. It has had thousands of hits, since I began writing it, a year ago. I receive up to fifty emails a week, asking for advice, offering good wishes and of course the odd one or two, criticising me.  I began blogging, out of troubled times and continue to do so, today, still experiencing turbulence, but happy to have left the UK and all the difficulties behind. I aim to continue blogging, whatever my future holds.

People are interested in others lives.  My life, it seems, has been the topic of conversation for a while.  Documenting my journey is important.  As the 'Real Truth Blogger', I don't lie.  Too many people gossip behind the backs of others; a blog not only stops that happening in the main, but also documents reality, not someone else's made up version of events!

My biggest achievement, since moving to Spain is surviving without my partner, who today, as I write this, has been  away for five months.  The last time I lived on my own, was in 1992, as a student, attending University in Southampton.  I have more or less, always been in a relationship, since that time.  Although I miss Darrell terribly, every day, I have relished, the challenge of surviving, with very little money, on my own.  I have grown dramatically over the last year, and have once again, become a strong, independent person, free from the control of the ghosts of the past. 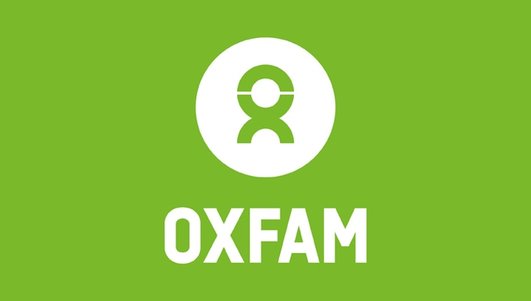 Just a few words about Oxfam, as I don't want to dwell on the past too much.

My campaign against this charity will continue, especially after recent revelations, of a death of one of my Irish colleagues, in very similar circumstances, to those that brought me to Spain in the first place.

​During my first year in Gran Alacant, Oxfam have remained unable to admit the truth, they have been hiding for so long.  I hope this year, will at least be the start of Oxfam finally coming to terms with what has happened to this once respected charity! 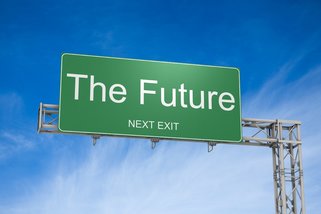 Darrell is back from Australia next month. We both are beginning a new adventure, opening a bar in Masa Square, Gran Alacant.  We have both done this type of thing before and are looking forward to a bright and successful 2017, after such an awful year in 2016.

I am at the planning stage with a partner and still deciding what type of venue to open.  The bar was always a popular destination and we hope it will once again enjoy the success it always did.  We are hoping it will open on St Patrick's day, March 17th 2017, all are welcome!

Thank you to all my readers for their continued support